Guide for Contractors on IR35 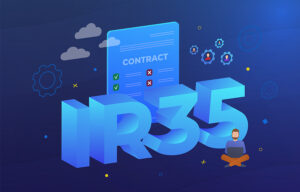 IR35 was introduced in April 2000 as the Intermediaries Legislation to tackle the problem the HMRC had with what they term “disguised employee”.

The objective of IR35 is to determine whether a contractor is correctly working as self-employed or should be a permanent employee. The reason for this is because HMRC have seen the fall in PAYE and National Insurance contributions be people who have arranged their affairs to minimise tax.

The case of Jones v Garnett finally reached its end on 25 July, when the House of Lords gave a judgement unanimously in favour of the taxpayers.

This marathon of a case concerned Mr and Mrs Jones, who owned one each of the two shares in Arctic Systems Ltd, their family company. Mr Jones was the fee-earner, as an IT consultant, and Mrs Jones dealt with the admin work.

As is normal in such companies (if they have a competent tax adviser!), the Jones took very little out of the company in the way of salaries, and instead paid out the profits as dividends. This is the most tax-efficient way to extract cash from such a company and is normal, basic tax planning.

HMRC, decided in 2003 that this strategy was unacceptable tax avoidance. HMRC have made amendments to the legislation and to bring stop this Tax Planning in the future.

With this success HMRC are extending the scope of IR35 to the Private Sector, and will enforce the Legislation from the 1st of April 2021. By capturing “disguised employees” who are using Limited Companies to operate, HMRC will increase Income Tax and National Insurance revenue received by Treasury.

Are you inside or outside IR35?

Contractors need to be sure of where they stand in terms of IR35. We advise you look at 3 main areas, called SDC (Supervision, Direction and Control):

Are you supervised whilst you carry our your role and responsibilities?

Are you able to work under your own recognisance?

Do you decide how you tackle the work you have been contracted to do?

Are you given the freedom to carry out your duties as you see fit?

Are you guided by a Senior Member of Staff?

The above definitions seem to be loaded towards making more people employees. Therefore if you report to a member of staff and are not able to fulfil your duties without control of senior members of staff you may be INSIDE IR35. In order to check your position you should complete a SDC questionnaire.

What are the consequences for contractors?

If you are a contractor using a Limited Company to run your business when government guidelines deem you to be an employee for IR35 purposes, we recommend you get Professional Advice as you will be deemed to be breaking the LAW and could face penalties of fines or imprisonment.

If you are operating Inside IR35 will mean a loss of net income.

The limited company benefits for that employment or contract are lost.

Tax and NI contributions will be made on a periodic basis.

A Contractor can operate through an Umbrella Company which reduces the burden of running a Limited Company for an Administration fee while being viewed as an employee by HMRC.

Take advice before you join one of these companies to ensure that they comply with HMRC guidelines.

We have advisors all over the UK. Get in touch today for expert guidance and support.
← Prev Next →
Published: March 15, 2021
By: Edward Tudor

The Client National Materials Testing OrganisationExtensive & Varied Customer BaseVast Array of Specialist Services Provided The Problem The nature of the client’s business meant that they required a wide range of highly educated and specialised personnel. Roles...

Operations by design – the four V’s

Operations can be costly, hence the ongoing drive for productivity and efficiency. There are four aspects of your business that will drive the way your operations are designed and their associated cost profile. First, think McDonald's and you’ll understand the impact...

Why you should get emotional about your service processes

Everybody has a story to tell about their awful service experiences and social media helps make those stories freely available to all. Sometimes things seem to go wrong even when the ‘process design’ seems fine on paper and the systems are working as they should. Why...

Everything is a process - from making a cup of tea, going on holiday (remember that?) to running an organisation of any size - everything we do relies on that most basic of building blocks - process. A series of connected or aligned tasks taking you from a start to an...